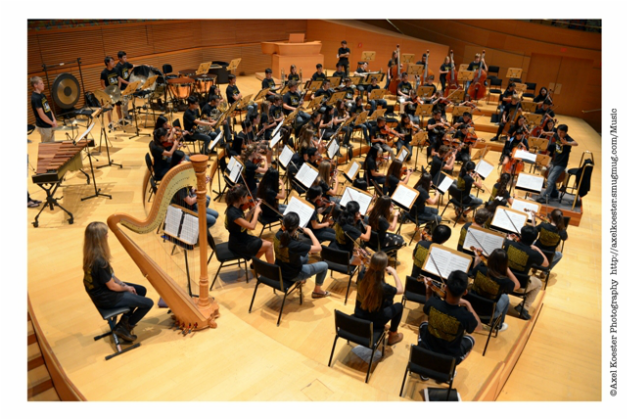 Chamber Orchestra
Made of the Symphony's top players, this elite orchestra ............

Our Founding Director
Director Christopher Schwabe, was our director of orchestras from 2002 to 2009. He began our orchestra program in 2002. Read more about our founding director here.
We've come so far!
We stand on the shoulders of those who came before us, immersed in the culture of musical excellence that champions the overall growth of the student musician.

League of Astonishing Strings China Tour 2014
The Symphony Orchestra was one of four orchestras in the entire U.S. invited by the League of Astonishing Strings to participate in a 12 day tour. The tour included performances in six concert halls including the Hangzhou Grand Theatre, Xuzhou Concert Hall and the Shanghai Oriental Arts Center.
LA Philharmonic Youth Orchestra Mentorship Program 2011-2013
Through auditions, the Symphony Orchestra was chosen by the LA Philharmonic Youth Orchestra Mentorship Program as one of top four youth orchestras in the greater Los Angeles area. Selected to receive a "premier status" partnership, students received free coaching sessions from LA Phil musicians and other teaching artists over two years, culminating in a Walt Disney Concert Hall performance.

American String Teachers Association National Orchestra Festival, Atlanta 2012
Our Symphony Orchestra travelled to Atlanta, Georgia to participate in the National Orchestra Festival in 2012. The festival brings together orchestras from around the country "to provide an unparalleled opportunity to receive placement, ratings, comments and education from leading clinicians and adjudicators in the industry." (www.astaweb.com)

Walt Disney Concert Hall Performance 2009
Click here to view our printed program. Listen to excerpts:
Carnegie Hall 2006
With Costa's Choir, the Symphony Orchestra headed to Carnegie Hall in 2006. "Mira Costa was one of about 15 California school groups heading to the famous concert hall to perform during the year, including a group from El Segundo High School and Dorsey High School in South Los Angeles. Talented schools from every state are selected to perform at the famous concert hall by the Mid-America Productions company, which works with Carnegie Hall to produce the shows." (Hermosa Beach Neighborhood Association)
Annual Participation in the SCSBOA
The Symphony Orchestra has performed at many adjudicated festivals sponsored by SCSBOA (Southern California School Band and Orchestra Association) and consistently receives a ‘superior’ rating, the highest rating awarded by SCSBOA.