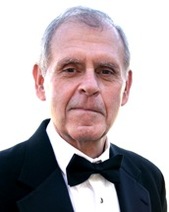 Christopher J. Schwabe was the director of orchestras at Mira Costa High School from 2002 through 2009 when he retired from the Manhattan Beach Unified School District.  He spent over forty-six years teaching educational music in the public schools and began the orchestra program at Mira Costa in 2002 having been coaxed out of retirement after his previous position as conductor of the Santa Monica High School Symphony Orchestra.

Mr. Schwabe received his Bachelor of Music Education degree, concentration in strings, from Indiana University and a Master of Arts degree in cello, doublebass, and conducting from Ball State University. He has the distinction of taking two different high school symphony orchestras to Carnegie Hall, having conducted the Santa Monica High School Symphony Orchestra on Easter Sunday, 2002 and the Mira Costa High School Orchestra on April 11, 2006.  Following his highly successful Disney Hall Concert in June 2009, Mr. Schwabe retired from teaching at Mira Costa.

The California Music Educators Association has honored Mr. Schwabe as the Outstanding Music Educator of the Year. In addition to teaching at Mira Costa and Santa Monica High Schools and Lincoln Middle School in Santa Monica, Mr. Schwabe has educated students in Indiana, as well as Sunnyvale and Paramount, California.  Mr. Schwabe also taught at Santa Monica College, the Idyllwild School of Music and the Arts, and in the School of Performing Arts Early Development String Program at the University of Southern California where he received the Outstanding Teacher Award for extraordinary service to string pedagogy. He has conducted numerous honor groups throughout Southern California and is in demand as a clinician at workshops, conferences, and conventions throughout the state.

Mr. Schwabe has been a master teacher for numerous music educators and takes great pride in the number of students who have graduated from his music programs and become members of professional orchestras as well as outstanding music educators in public schools, colleges, and universities throughout the country.