We are thrilled to celebrate the Mira Costa Orchestra Program’s 20-year anniversary at the Music Center’s Walt Disney Concert Hall on Thursday, June 30th at 8PM.
​
We hope that you will join us to celebrate the award-winning Mira Costa musicians as well as guest ensembles from the Manhattan Beach Middle School orchestras. 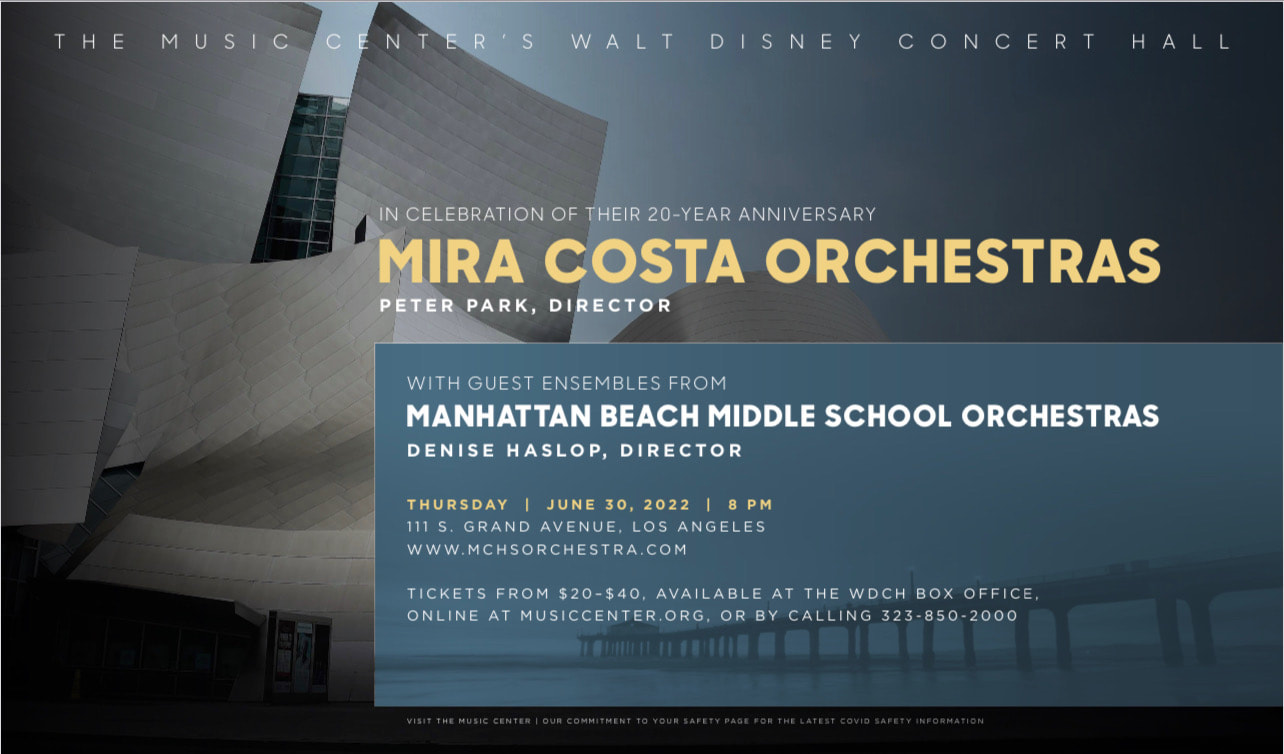 Walt disney concert hall
WELCOME WINDS/PERCUSSION FAMILIES
LEARN ABOUT FAIR SHARE
​& DONATE TODAY
Elementary
Donation
Founded in the fall of 2002 with a string orchestra of just 19 students, the Mira Costa Orchestra Program has grown under the leadership of current director, Peter Park, and now involves more than 150 student musicians, with a reputation as one of the premier high school programs in the state of California. With Mr. Park, who is a much sought after clinician, presenter, and guest conductor throughout California, our young musicians enjoy a robust curriculum augmented by a variety of enriching experiences, requiring much attention and effort each and every year from students, parents and faculty.

Known for presenting diverse and quality programming, Mira Costa Orchestras prepare multiple concerts annually, drawing from the major orchestral repertoire.  Since the Spring of 2010, they have premiered nine new compositions written expressly for them, including an original piece by GRAMMY and multiple Emmy Award-winning composer Lee Holdridge.

The music department at Mira Costa operates at a high level of artistic ambition and achievements.  In 2012, the Mira Costa Orchestras were selected for a premier status partnership with the Los Angeles Philharmonic.  In 2014, the Costa music program was awarded the prestigious GRAMMY® Signature Gold Award for being a top three high school music program in the United States.  In 2015, the California Department of Education designated Mira Costa High School as a Gold Ribbon School through the strength of its Performing Arts Department.

The orchestra program currently consists of the Philharmonic, Sinfonietta, Symphony and Chamber Orchestras.
​​
Due to the level of training, rehearsals, performance and professionalism taught to the students over the years in orchestra, many have gone on to play in prestigious college music programs either as a career or to continue as a hobby.
​